​Over the past 20 years, Jonny has studied under various professors of voice from internationally recognised schools, following the traditional Bel Canto technique. More recently Jonny has begun to explore other methods used in Musical Theatre and more contemporary styles to add variety to his performance and repertoire.

​
His training in nussach and chazanut has taken a similar route, studying under several accomplished chazanim both in London and Israel in order to create his own unique blend of chazanut to shape a style which appeals to the masses of our generation. 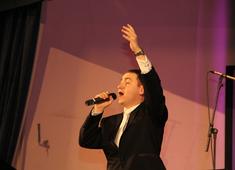 ​Jonny is a lead soloist with the Shabbaton Choir, having sung at the annual Choral Midnight Selichot service together with Rabbi Lionel Rosenfeld since the aged of 18. Together with the choir, his expressive and melodious singing has featured in many concerts both in England and abroad.

As the proud grandson of two Holocaust survivors, Jonny takes pride in officiating at many of Anglo-Jewry's official commemorative events. He has led the national Holocaust Memorial Day service on many occasions, appearing on the BBC as well as ITV news.

Jonny has recently been showcasing the Dreams Of A Nation production with Mizrachi UK in over 10 different communities in the UK as well as Netanya, Jersualem., Miami, Boca Raton and Chicago. During lockdown, the team produced a range of professional films with spellboudning music and narration around the Jewish festivals - (available on youtube and in the video gallery)

After officiating as part-time Chazan at Mill Hill Synagogue for two years, and Chazan of Edgware United Synagogue for a further four years, Jonny was appointed Chazan of Stanmore and Canons Park Synagogue in 2011.

Jonny was born in London in 1984 into a family where his love for music and davening was encouraged from an early age.